Smoosh vs. The Anti Smoosh 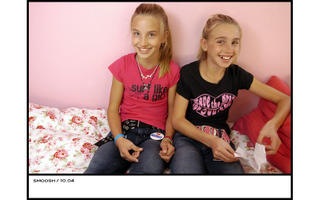 This is Smoosh,, an awesome grrrrl-band we saw rock the Bowery a few months ago. (Photo by the inimitable Ryan Schierling.) Smoosh is Aysa and Chloe, two sisters from Seattle. They're a critically acclaimed pop duo who are sweet and cute and smart and sassy and are totally using their adorableness to spread the power of good. HAIL SMOOSH!

This is the Anti-Smoosh. They're called "Prussian Blue" and they're on a mission to use their blondhaired/blue-eyedness to spread the message of evil.. Please note that ABC named their jpeg "Nazi Twins." To further illustrate their evil, I offer this snippet from an interview in Vice about their name:

Interviewer: "Please tell me the significance of the name Prussian Blue."
Nazi Twins: "Part of our heritage is Prussian German. Also our eyes are blue, and Prussian Blue is just a really pretty color. There is also the discussion of the lack of "Prussian Blue" coloring (Zyklon B residue) in the so-called gas chambers in the concentration camps. We think it might make people question some of the inaccuracies of the "Holocaust" myth."

Twins are evil by nature! I read that article on Vice and I was amazed that things like that grow up in this country. Anyway, just passing by...

The Nazi Twins make me sick!!!!

Their parents should be thrown in JAIL, for teaching them such racist Crap !!!!!