Project Runway - Final 4? Could It Be?

So. On the ProjRun website, most of the designers have tee-shirts for sale. 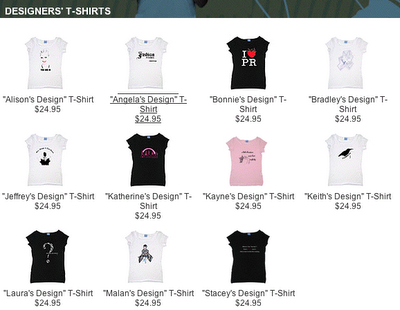 Who's missing? Surely by now you've looked for your favorite designer and realized you can't buy a shirt from:
Robert.
Ulli.
Michael.
And ... Vincent.

Ever since the basket-hat, I've been waiting for Vincent to go. But ... it sure looks like his model is Jia Santos. And we know that Jia, upon recovery from a horrible bus accident, wanted to know if she was still on the show. Which makes me think Jia goes pretty far. And unless someone else wins and steals her away, maybe she goes all the way with Vincent? (and I don't mean it like that, take your minds out of the Red Lobster trash.)

In other news, wouldn't you like to send Jia some pears? She loves pears.

Special thanks to Noah, who cracked this code (if this is, indeed, the code) So look at these shirts! And he'll get a free one! Or something. Or, you can just buy him a shirt. He does, after all, clean the litter box.
Posted by bex schwartz at 6:31 PM No comments:

So Blogging Project Runway linked to a preview video on yahoo about the upcoming "EPISODE 4" where we know someone gets yanked off for "Breaking the rules."

Per the new viddy, we know it's not Kayne, Michael, or Robert.

Now, I've been tracking the whole "Keith's sketches are copies" miniscandal, and I believe him when he says that the sketches were part of his trend-tracking portfolio. Because they're EXACT sketches of models runway-walkin' - I think he did screengrabs and then sketched these outfits for the reason he claims - the whole trend-tracking thing makes sense to me.

My personal theory about who gets kicked off? Well, after watching the preview for next week, I think the tone and timbre suggest the specific type of rule-breaking is drug use. Because, MAN, they seem shocked. And I suspect Keith. Because the inability to keep one's eyes open (and the way he acts during the interviews) remind me of nothing more than this "business meeting" I once had with a playwright who wanted me to be in his play. The playwright was out of his gourd on the heroin for the whole meeting. I thought the drooping-eyelids were totally/maybe narcolepsy, but then when the cafe staff threw him out of the cafe for drug use, I grokked. So. This is, of course, wild conjecture, but methinks Keith is using los drogas and they're kicking his snotty ass off. THIS IS WILD SPECULATION, OF COURSE.

I suffer from migraine headaches and people probably often assume that I'm on drugs because I look so fucked up. So, forgive me, Keith, for speculating. Because I think you're a top-notch designer and I'm pretending you're like a character on a soap opera instead of a real person by speculating about you like this, so please know it's not the real you I'm discussing, it's the you whom you play on tv.
Posted by bex schwartz at 2:49 PM No comments:

Opie and Anthony linked to me and my lousawful McPheeisms from my appearance on MSNBC. Woo!

They call it "Awful Mcpheeisms from VH1 Commentator Bex Schwartz" and it's on their site here.

Posted by bex schwartz at 1:10 AM No comments:

How About a Nice Game of Chess?

So we watched War Games tonight, because the boof had never seen it (he claims that it came out during his "art fag" phase when he only saw movies with subtitles) and because it's one of my favorite movies ever. It's also possibly very much responsible for the deep-seated (did you know it's deep-seated, not deep-seeded? it's kindasorta like the "all intensive purposes / all intents and purposes" thingummy) sense of anxiety I have about nuclear war and mutually assured destruction (the only way to win is not to play).

And then I realized: kerrang! It's not just me! It must be an entire generation of late 70s / 80s kids who had a really blissful childhood, free from duck-and-cover drills and hiding under one's desk -- we knew the Russians were bad but we didn't have to deal with that every day. And then, whomp, here comes War Games and suddenly we totally understand the rules of warfare have changed and that if there ever is a World War III it means we're all gonna die. Thanks a lot, War Games. Thanks for breaching that cold, hard gap between innocent childhood and Paxil-requiring adolescence. (Note to readers: I do not take Paxil, I just love that there's an anti-anxiety product called PAXil. I can't wait til someone comes out with SHALOMee).

BUT! In lighter news: let us salute Dr. Falken. What a hunky specimen of super genius.

Back in 01 when there's was lots of talk about Dr. Dean Kamen, and his life-changing invention called, alternatively, "Ginger," or "IT" or the "Kamen Machine" or whatever, (and then, was somewhat disappointing when we learned it was the life-changing, uh, Segway, ) I totally started fantasy-crushing on Dr. Kamen because I knew he lived on a remote island ( North Dumpling Island -- which he fracking OWNS) and I thought maybe he would greet high school visitors by flying a pterodactyl over their heads, and boy oh boy did I want to go visit.
Posted by bex schwartz at 12:43 AM No comments:

Snarking on McPhee and Hitting on Oprah

So if you're a PC, you can watch me make an obnox-ass of myself on the Scarborough Country.

Here's me on Mcphee!


Here's me on Oprah!
Posted by bex schwartz at 1:00 PM No comments:

These Are Called Music Videos!

Doin' It for Scarborough Country

Yo people. I'm on Scarborough Country tonight around 9/8c. Watch it or be so very, very sad.

MATHMAN! MATHMAN!
Posted by bex schwartz at 4:52 PM No comments:

Mama Always Said Life Was an Awful Lot Like Mathman

Ah, yes. Back in my youth, I spent a lot of time watching edumacational t-vision. My fave-iest fave rave was Square One, and I often fantasized that someday Kate Monday and George Frankly (from Mathnet, duh) would need me to help them solve a crime and I would leap to their rescue and save the day, and both Kate and George would shower me with love and affection (much like Nelson).

But my other best from Square One was the creamy, dreamy Mathman. Or, rather, less creamy and dreamy and more anxiety-inducing and mildly terrifying.


To this day, when I find myself in a mild panic-type-of-situation, (such as attempting to leave my Times Square office building at night, trying on pants, or realizing I've walked seven blocks in the wrong direction in Brooklyn somewhere,) in my mindhead I chant "Mathman, mathman, mathman!"

Also, whenever I make a wrong decision or a mistake, I imagine a grumblygrumbly tornado named Mr. Glitch coming to eat me.

And then I get really freaked out and I simply must beat myself up over whatever mistake or wrong decision I've committed on the world. Better than being eaten by a grumpypants tornado named Mr. Glitch.

My friend Jim notes how odd it is that Mathman repeatedly chants his own name. I think it's a lot like that moment in "Batman Begins" when Cillian Murphy as Scarecrow is dosed by his own nerve gas and yells "SCARECROW!" instead of yelling "ME!" because you'd think that if everyone else gets dosed and yells "SCARECROW" then the Scarecrow himself wouldn't see himself and yell his own name -- UNLESS, of course, unless he is just like Mathman.

Which is, of course, entirely possible.
Posted by bex schwartz at 3:34 PM 1 comment:

Anyone who knows me knows I love My Little Pony. So I love it even more when little ponies talk dirty.

Whilst I'm at it, I am amused by this guy who does indie-rockapella. I hate a capella with a passion (mostly stemming to those annoying nasal-grunting chest-thumpers who used to invade the library during finals at college and "treat" everyone to a capella versions of Aimee Mann or Ani Difranco or whatever - MAKE IT STOP) - but for some reason this guy's earnestness + devotion to indie rock makes me smile. Particularly his version of Arcade Fire's "Rebellion" and Ben Fold's "Annie Waits." The way he makes that guitar noise (blurgh blurgh) makes me titter.

(Link courtesy of supragenius Stereogum).
Posted by bex schwartz at 1:33 PM No comments:

So, stay tuned, tigers - I've been swamped because I've been working on the HOT HOT HOT new video for The Long Winters' hot new single, "Fire Island, Ak," off their hot new album "Putting the Days to Bed" that drops next Tuesday 7/25! (For a delicious, pre-release taste, you can stream the album right here.)

And check it the fuck out! We're on VIDEOSTATIC, one of my super fave websites. Read all about it right here!

And yes, that's me, wearing my lucky shoot pants and not wearing a speck of make-up (except for the permapresent glitter - but that's not make-up, it's kind of embedded in my pores at this point). 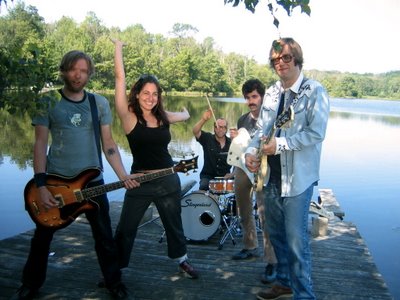 The Kitty Has Two Faces 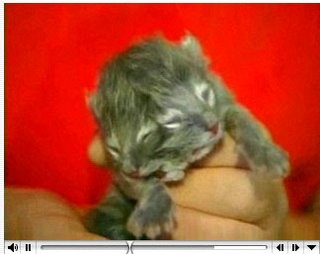 Balactica Returns! (But not Until October)

To tide us over until then, here's the 3rd season promo:

Posted by bex schwartz at 5:13 PM No comments:

Sweet jebus, in real, true, life, they actually found a snake on a plane! Although, alas, Samuel L. Jackson was nowhere to be found.


Thanks to Constant Reader Ian for the tip.
Posted by bex schwartz at 1:25 PM 1 comment:

Robot Chicken Does the Swedish Chef

This is, sans doubt, the greatest thing I have ever seen in the history of television. Bless your heart, Robot Chicken. Bless your pop culture lovin' (but not in a Family Guy way) heart.

Posted by bex schwartz at 5:52 PM No comments:

AH YES, Project Runway is back! With a vengeance! I say: Vincent is next to go, but they had to (spoiler alert) axe Stacy because of the sewing thing. Or lack thereof. Top three: Robert Best, that Keith guy, and the classy redheaded broad. Although that little Bjorkian blondie is a cutie, and maybe the rock'n'roll guy will tone down the bad aspects of Santino and boost up the awwesome aspects of Santino.

Trust me, it's more fun to sing than it looks on paper. Er, on interweb.
Posted by bex schwartz at 11:31 PM 1 comment:

Right Now, Bex is Having Trouble Catching that Extra Hour of Sleep

So, just the other day, I caught the video for Van Halen's "Right Now" on the ol' VH1 Classic. And I fondly remembered just how much I enjoyed watching that video when it came out in 1991 - right in the heyday of my MTV-watching years. Now, I'm not so much a fan of the Cabo Wabo Van Halen era, preferring Diamond Dave to the guy who can't drive 55. In fact, I'm not so much of a Van Halen fan - I'll sing along to "Jump" on the radio, but really, who doesn't -- which is why it was TOTALLY BIZARRE that every time I saw this video, when they got to the bit that goes "Right Now, Van Halen is planning a world tour," (at about :56 in) I would be hit with a total mega frisson of excitement. Why did I get so stoked that Van Halen was planning a world tour? I have no fracking clue. But IT STILL HAPPENS TO ME, EVEN NOW!

Giant Squid on A Segway!

I'm mad stressed but it's making me laugh.

Daps to BWE for the headsup.
Posted by bex schwartz at 4:45 PM No comments:

They Said Wait Until Tomorrow

So, all you growltigers out there, I'm megasuperdoubleplus busy. Too busy to talk about it, but I will say this:
1) the new celebreality spots are going to make you squeal
and
2) you will find a clue (A CLUE! A CLUE!) as to my busy-ness right here.
Posted by bex schwartz at 1:28 AM 2 comments: