Watch me, in my boudoir, recapping Sunday night's television awesomeness, in a podcast for Best Week Ever's new feature, "Best Night Ever."

One of my constant readers writes it in with a new turn-of-tongue: he suggests calling "Best Night Ever" (or BNE) a "beanie." Name it and claim it, Ian McCarty!
Posted by bex schwartz at 8:43 PM 3 comments:

This is a Whale Blowing Bubbles!

I am right terrified of whales, but I like this whale blowing bubbles!
Posted by bex schwartz at 1:19 PM No comments:

A sphincter says whut? Surely, this is a hoax, a hoax of Skaggsian proportions.

This is the best part of the article: "In preparation for the role, Paris is apparently joining the Order of Mother Teresa missionaries, and will travel around Bangalore and Calcutta to care for the sick."

I present Crispin Glover's "Clowny Clown Clown" not just because it triggers the "zug" response, but also because I hearts all over Crispin Glover.

Posted by bex schwartz at 6:15 PM No comments:


But Geez Fucking Louise, I love this song. The counter harmonies. "I'm just not a notch in your bedpost, but you're just a line in this song" -- !!! Whoa, Nellie.

Look, I spent the night with my boys, Josh and Jim, and we went to not one but TWO, TWO, two fucking piano bars -- because earnestness is the new emotional detachment. And, dig: I fucking love showtunes at piano bars. All-bar singalongs are so cluhouseriffic and weird-Jew-camp-nostalgia(fauxstalgia?)-inducing, that I adore the one we attended. So, HUZZAH: I love TEH EARNESTNESS, and I love the fucking hit motherfucking hit single (with a motherucking bullet).
Posted by bex schwartz at 2:32 AM No comments:

Although I would like to add, in response to the remark that VH1's "house comedians seem to be a little flat as of late ...," that my breasts, as always, are remarkably perky.

This is all my all-time favorite thing EVER on the t-vision. It's from an episode of "The Tribe", this post-apocalyptic Australian soap opera with which my roomie is mildly obsessed.

I'm not 'splaining anything else because I think this stands on its own, and, yes, that's me giggling uncontrollably.

Without further ado: GRUMPYPANTS.
Posted by bex schwartz at 12:32 PM No comments:

Olympic Fever to the Fucking Max

Oh my stars, I've watched so much Olympic goodness (everything but hockey!) that Olympics joy is oozing from my pores. To that extent, I have helpfully written words to the Olympics theme song:

(and now the faster, more upbeat section)
There's skating and skiing
And, ooh!!! There's the biathlon!
There's hockey and curling
And outfits that look like Tron.
There's sledding and luging
And skeleton on your face, yeah.
There's snowboard and slalom
And outfits from outer space.

(the astute noter remarks that I am quite caught up in Olympics fashion. It's true - the athletes often look like outerspace superheroes and that means I'll watch speed skating anytime. And of course, I have seen every Figure Skating performance at least five times, thanks to the awkwardly delicious "crackling good television" that is Olympic Ice (on USA every day at 6pm) -- it's JUST figure skating, and they usually have a lot of extra time to fill, which means playing and re-playing not only Olympics 2006 skating events, but they often throw in Skating's Greatest Hits and show Brian Boitano's '88 Calgary performance, or other such goodies. And they usually do a fauxstalgic montage of the day's events, most often involving Jamie Sale and David Pelletier being tools, eh.)
Posted by bex schwartz at 12:10 AM No comments:

Thus spake the website: "Feathers fly and teddies soar as you converge on Union Square for a massive urban pillow fight! Swing and whack as you evade pillow-wielding assailants on E 14th St. Bring a pillow to the square at 2 PM and wait for the signal. Pillow fight!"

Will I be there? If I'm feeling all better (I have an excuse because I'm sick).
Will you be there? Only if you're AWESOME!
Posted by bex schwartz at 3:52 PM No comments:

This is a Crab Eating a Stick 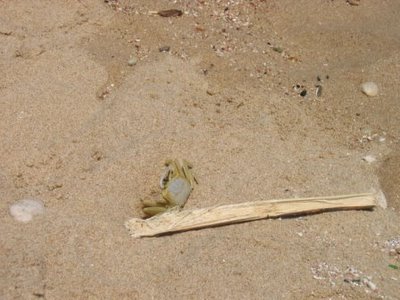 Josh: THIS IS A CRAB EATING A STICK!

Bex: it really was eating the stick!

Josh: did you try any stick?

Bex: i couldn't try anything else. those crabs are so fucking fast, with their sideways sprinting. i had to wait for like 15 minutes by the crab holes to take photos of the crab and the crab eating the stick dragged that stick down the whole fucking beach and i had to run after him and crouch silently til he would re-emerge from his crab hole and continue eating his stick so I could take a picture of a crab eating a stick and eventually title it "This is a crab eating a stick." 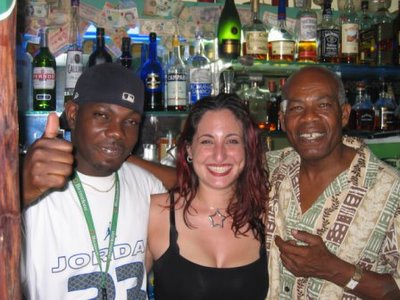 We spent our last night in Barbados -- (actually, it was our second "last night." Our first last night was Saturday because we were supposed to leave on Sunday, but then on Sunday we got to the airport and found out ((even though we'd called the airline and they confirmed that our flight was on time -- LIARS!!!)) that not only was our flight cancelled, but that we couldn't get on another flight until Tuesday. Shucks, right? Two extra days being "stranded" in the Barbados? The two extra days were extra-special because I spent the first few days of vacation feeling like my brain was melting out of my ears, and then we went to a clinic and the nice doctor gave me antibiotics and painkillers. The antibiotics are swell, even though it sucks to be on a beach-vacation and hear the instructions, "Stay out of the sun and don't drink alcohol" and the painkillers made me want to curl into a hole and die, so if anyone likes codeine, do let me know. Becaause I scream, you scream, we all scream for codeine, and I will never take it ever, ever again) -- at the Gap Bar, where we met these two lovely people. That's Cardinal on the left and George on the right.
Posted by bex schwartz at 4:00 PM No comments:

I'm Back from my Ragin' Bajan Vacation! 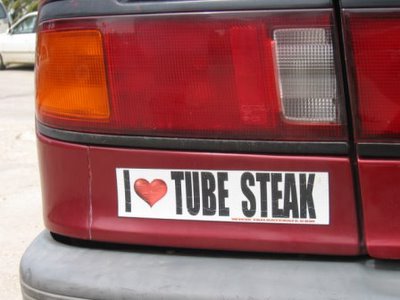 I'm back, and I'm tan, and I'm on cipro.
And this is the world's greatest bumper sticker.
Posted by bex schwartz at 3:55 PM No comments:

All My Bags are Packed, I'm Ready To Go

Well, kids, I have the flu or else just a supercold and I am taking off for warmer climes for a much overdue stint of sun, sand, and rum drinks avec umbrellas.

I am mildly terrified about getting on an airplane with a cranium stuffed full of congestion, but i'm hoping the whole "don't fly if you're stuffy!" thing is just an urban myth.

See you next week! I'll return bronzed and relaxed and flu-free. Woo!
Posted by bex schwartz at 6:19 PM 2 comments:

Hey tigers - I did a prototype podcast for Best Week Ever -- they're planning on doing daily "Best Night Ever" podcasts reviewing all the t-vision you forgot to watch. I watched last Wednesday's primetime offerings and you can watch me talk about it right here .
Posted by bex schwartz at 10:41 AM 1 comment: