I Somehow Always Thought it would be the Circus Lion

I LOVE NEW YORK -- the MANSTACK

So, mega New York fan Ponlork put my "MANSTACK" spot up on the Youtube! I wrote and directed this spot and I'm super stoked about it:

Love for the Medley

This morning, I was listening to Mike Doughty on the 'pod, and he was doing a medley of all these 90s songs, and a warm flush of contentedness washed over me.

Because, there is nothing better than a good medley.

A good medley lets your brain experience all the creamy-nougat-centers of all those tasty morsels of music by combining the best bits to stimulate the pleasure centers in your brain.

The first time I experienced the joys of medley, it was Weird Al and his "Polka on 45" jam.

And just yesterday, youtube featured a clip from my friend Rob Paravonian, wherein he rants about Pachelbel's Canon. The medley bit is at the end:


See? Doesn't the medley make you feel good? It's all these little pieces of songs that make you happy, usually because you look back at the happy-songs with fondness and nostalgia.

The neural pathways of the medley are also linked to the joy that comes from watching retrospective clip shows of your favorite sitcoms and one-hour dramas.
Posted by bex schwartz at 11:59 AM 5 comments:

Nothing says Christmas like Emmet Otter. Especially because I weep, to this day, at the notion that poor Emmet sacrificed his mother's survival by putting a hole in the washtub -- just so he could pursue his art! It pains me, oh, it pains me still.

And so this is Christmas, and I wish he was mine, he never drank water, he only drank wine.

(That's the amalgam between John Lennon's Christmas song and Peter, Paul and Mary singing "Old Stewball Was a Racehorse" )
Posted by bex schwartz at 12:09 AM No comments:

Hi, friends. I am a busy little beaver these days, but I wanted to hip you to this new gig I'm doing: I'm blogging for a brand-new social network called Oomph. It's still in its beta phase, but please feel fry to sign up and befriend me, and take a sneak peek at my oomph blog.

Thus says Urban Dictionary.
Posted by bex schwartz at 11:08 AM No comments:

So! On December 30, 2004, I had a chat with Joshua "Danger" French that I blogged and entitled "Crossing the North Pole with a Curtain Rod and an Old Duck." In this very important chat, Mr. French coined the term "kickawesome."

If you google "kickawesome" today, there are thousands and thousands of hits! So, with some help from my genius google-hacking friend Tom, we figured out how to find out if Mr. French was actually the originator of the word "kickawesome."

To search google by date, you have to figure out the Julian date of whatever date you're trying to search.

Which means that "kickawesome" originated on the internets on 12/30/04, and Joshua "Danger" French officially coined the word. And then it spread like wildfire! Or like herpes! Depending on which visual metaphor you prefer to imagine spreading!

And, fret not, I have notified urban dictionary and Merriam-Webster. If you'd like to let other open dictionaries know, please be my guest.
Posted by bex schwartz at 4:04 PM No comments:

LOOK, IT IS A GERBILTHING EATING A BABY CARROT. 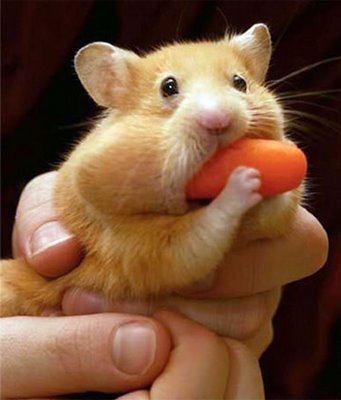 When I come back in the next life, I really want to be a gerbilthing eating a baby carrot.
Posted by bex schwartz at 12:23 PM No comments:

OH NO! THERE ARE RACCOONS IN THE GUTTER! 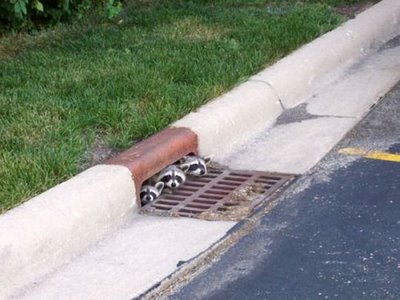 I just want to eat them up. As long as they're not rabid. But, seeing as they're out in the middle of the day, I slightly fear that they're rabid. So keep your distance, lest you require many many shots in your tummy tum tum.
Posted by bex schwartz at 12:21 PM No comments:

... and also best remembered by me for this exchange in "The Dream Team" when all the crazy people are in a van going through the Lincoln Tunnel and Michael Keaton's character says something like:

Michael Keaton: Isn't it true that if just one of those teeny tiny tiles broke loose, we'd all be crushed by millions of tons of water like a tiny bug?

Peter Boyle: I will hold back the water.

Michael Keaton: Thanks, Jack.
Posted by bex schwartz at 4:58 PM No comments:

Oh, my beloveds, especially my beloved men who are veggies: RESIST THE TEMPTATION TO EAT THE TOFU! Because, according to this wackjob, a DEVIL FOOD is turning our children into homosexuals. And what is that devil food, pray tell?

Because of it's estrogen-induced feminization properties.

Titter titter chortle chortle. Clearly, this is the most important news of the day, and I beg you to heed its warning. But, luckily? Soy sauce: okay. Tempeh: totally fine. Miso and natto? Check and check. Just watch that tofu, tigers. Or else your manhood might shrivel and turn into an orchid.
Posted by bex schwartz at 2:51 PM 1 comment:

The Music of Hand Farts

Let me introduce you to the manualist, John Twomey:


My friend Dale was inspired to learn how to fart his hands by watching this genius on the Tonight Show with Carson.

I think we could all stand to learn a few things from this amazing talent.

Imitation is the Sincerest Form of Flattery (Right?)

MAD TV spoofed Flavor of Love! And, because it's MAD TV, it's only almost funny, but, hey, at least they tried! And stick around for the last ten seconds because, as a VH1 person, I find it hilarious so you should, too. I love the Vee, you know I do, but MAD TV's tag is almost as good as "only on VH1."

Link via the Flavor of Love / I Love New York blog.
Posted by bex schwartz at 11:32 PM No comments:

(sing to the tune of "Last Night a DJ Saved My Life."
Actually, it wasn't last night, it was last week, but I've busy so let's just go with the song and not over-analyze things -- okay, Melrose? Thanks.

So I was in a cab on my way to the "Manstack" shoot and I was sitting in the back seat on the right side, and all of a sudden a ginormous tank of an SUV blew a light and slammed into the passenger side. I flew across the seat and crashed into the other door, but somehow my laptop case got in between me and the door, and took the brunt of the impact so instead of breaking my ribs, I just banged my knee and hit the laptop bag.

This laptop bag saved my life! Thanks, Brenthaven!

Rest assured, I am fit as a fiddle despite a banged up knee and a few bruises. But I like to pretend that the bruises are zombie bites. And I am embarassed to announce that I shrieked like a little girl. But mostly I am happy to say that I am superawesomely okay and that everyone should perhaps consider making a coat made of laptop bags, as body armor against both SUV tanks and also zombies.

This is a zombie-like photo of me and my beloved security laptop bag: 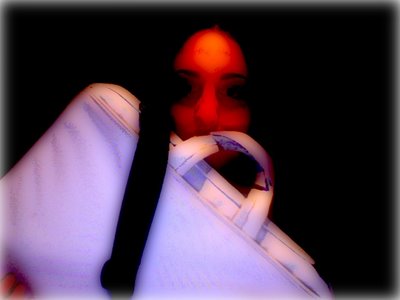 I Love A Good Manstack

I'm happy to report that my Manstack shoot with the lovely Tiffany for "I Love New York" went kickawesomely. "I LOVE NEW YORK" is going to be so awesome that it'll blow your socks straight off and then they'll catch an updraft and they'll end up blowing upwards and into your mouth and then you'll choke a little bit on them, and have to Heimlich yourself on a chair. And if that's not what you want from a tv show, then, buddy, you go watch some DVDs of "Serpico" or something.

How could you not want in?

If you don't watch it, no one will talk to you around the water cooler.
Posted by bex schwartz at 4:27 PM No comments:

So we watched Oxygen's new reality show "Bad Girls Club" last night and I'm not going to make a judgement until we see episode #2, because we all know the jazz about pilots vs. episodes.

But, snap judgement? There's this chick Zara who is mildly amusing because she's a tool and she kicks a lamp, thinking it's a balloon. But the best part about her is that she looks and sounds just like the chicken lady.

Posted by bex schwartz at 11:38 AM No comments: 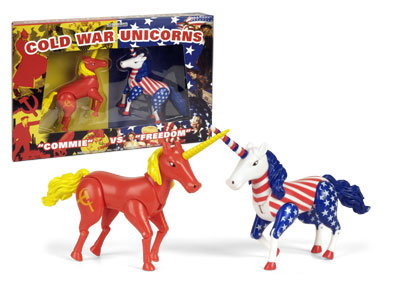 I would very much like these Cold War Unicorns, please.

Because nothing says "my childhood" like unicorns + a somewhat unsettling fear that the Russians were going to nuke us to high heaven.
Posted by bex schwartz at 2:51 PM No comments: 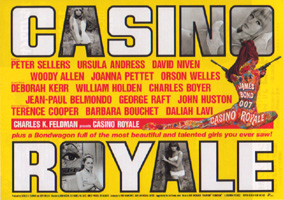 Oh man, don't waste your time or your money on the new Bond. It was yawny yawn.

Instead, watch the original Casino Royale, which is actually funny, Ursula Andress plays Vesper (although I totally thought her name was "Vespa" until the very end of the damn thing this time around), and Orson Welles plays Le Chiffre. And there's Woody Allen. Sounds like SO FRACKING MUCH OF A BETTER TIME, eh? Also: Peter Sellers. Also: partly written by Terry Southern.