Oh, brother! My roomie and I just (re)watched The Stand (the miniseries) and it is such a doozy. Despite having one of the worst endings of all time (the hand of god? bite me!), the whole shebang is really worth watching again, especially if you haven't seen it since you were 13. Or if the first time you watched it, you weren't really scared of biological warfare. When you watch it this time around, it's a fuckload scarier. And I will never, ever walk through the Lincoln Tunnel because of it.

But, oh! Jamey Sheridan will always be Randall Flagg, no matter which L&O he's on! And Laura San Giacomo will never look as lovely as the white-haired Nadine. And, oh, to watch Molly Ringwald and Gary Sinise make out in what must be one of the most awkward makeout scenes ever to be captured on film, featuring two actors who clearly don't often make-out in front of cameras! And m-o-o-n spells Tom Cullen! And beautiful Rob Lowe who can't talk or speak, but he emotes homoeroticism so clearly!

And, oh, how one assumes that everyone who goes to Boulder is enlightened, and yet they still do what god tells them to do. Even though god soooo didn't tell Larry to carry that damned guitar all the way to Vegas. Stupid Larry. Even if he does rock out "Eve of Destruction" at the exactperfect moment. And still! Why does everyone travel in such impractical clothes? Jumpsuits, people, jumpsuits! With lots of pockets! Like, no doykies! 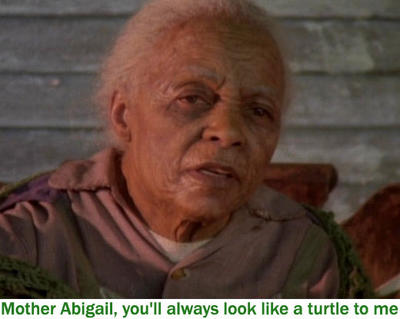 And Ruby Dee! As Mother Abigail! Who suffered through the worst makeup in the history of the miniseries. She looked like a turtle to me then, and she looks like a turtle to me now. It's the makeup. And the hunched shoulders/shawl combo that looks so much like a shell.

I spent the weekend curled up in a cozy cabin, watching movies.
Watch The Corporation! And you'll never drink milk (at least not in America) again!

Don't ever watch Sin City! Because you'll want those two hours of your life back! All the style in the world is no substitue for lack of substance. And Robert Rodriguez went all indie and left the guild for that??!! Interrobang!

Watch In the Mood for Love! If just to see the movie everyone else rips off.

And, for the love of all things awesome, please watch Network! Because it's so fucking prescient! And because no body has the ovaries to make a film like that anymore. And because everyone in it just shimmers with talent. And because, really, aren't you mad as hell and you're not going to take it anymore? Jesus fuck, I know I am.
Posted by bex schwartz at 11:29 PM

Hey Bex, first off, "Sin City" was a good movie. I strongly suggest that you watch it again.

Second, I have seen "Network" 12 Times in my 26 years (and counting) on this planet - and it's always one of the best films ever made.