Dear Tyra, I Just Want To Tell You That I Have The Shine

Dear Tyra,
When I was on vacation in Costa Rica in June, I took a bunch of photos in the pool and I said I was being JUST LIKE TOP MODEL, because I thought I remembered a shoot with one's face half in and half out of the water. Except, I apparently didn't remember it -- I foresaw it! With my psychic top model powers! Maybe, Tyra, that means that we have a subconscious link - like a neural network of awesomeness stretched across the sky. Check this shit out, baby! June 17th, 2008! I'm not all fancy glam made up, nor was Nigel shooting me in a wetsuit, but look! Same idea! Samesies! 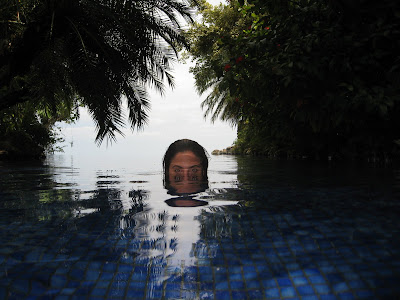 In an infinity pool, to boot!

Love and kisses,
bex
Posted by bex schwartz at 9:24 PM

I fell asleep in a bath tub last night.

It was hot water, not ice, and I still have all of my organs!